The first guitar a student chooses to purchase should depend on what style of music they want to learn to play.  Nylon String, Steel String and Electric Guitars all have different characteristics preferred for specific styles of music.  Many guitarists begin learning on one type of guitar and as they progress purchase other types of guitars for different styles of music.  6 string guitars are recommended for all beginner students.

Steel String Acoustic Guitars are often used for Country, Folk, Pop, Blues and Acoustic Rock.  These guitars do not need an amplifier, and are usually recommended by schools and group classes because students do not have to carry anything other than the guitar in the case.  The Strings on Steel String Acoustic Guitars can sometimes be tough on beginner fingers, especially young children, so a Setup with the lowest action possible is highly recommended.

For Classical, Latin, Flamenco and other similar Fingerstyle Guitar Music, a Nylon Stringed Guitar is usually preferred.  These Guitars are often referred to as “Classical”,  “Concert” and “Spanish” Guitars.  Nylon Strings feel softer and easier to play than Steel Strings to many beginner students.  These Guitars have a wider neck.  The Sound or Tone of these guitars depend mostly on the wood used to make the guitar.  When playing chords, many Nylon String players agree that using their fingers sound much better than using a Guitar Pick.  In fact, using a guitar pick on a Nylon Stringed guitar has been described as sounding like “Plastic on Plastic”.  In contrast, playing Single notes on a Nylon String using a Pick is often preferred by Soloists who like to play single notes very fast (and they sound amazing).  Since playing lead is for more advanced guitarists, students should only choose to learn on a Nylon String if they are  primarily going to study Classical, Latin, Spanish or other fingerstyle music.

Action – A term to describe the distance of the Guitar Strings above the Fretboard.  For example, “High Action” describes the strings as being farther away from the Fretboard and “Low Action” describes the strings as being closer to the Fretboard.  With High Action, the strings take more effort to press down and hold, while with Low Action, it is easier to press down and hold the Strings.  The Lower the Action, the more the strings become susceptible to Frets “buzzing” also known as “Fret Buzz” (string rattle against the Frets).  A Guitar Setup is recommended to ensure your guitar is working properly and the action is set best for the player.  A Luthier is a certified Guitar Repair Professional and Builder who does guitar setups and repair.  For many beginner Guitarists, the first few weeks of practicing can cause some discomfort and even pain.  Fingertip soreness is a common problem with beginners.  With Lower Action, the guitar strings are easier to press (easier to play) and therefore more comfortable to practice on.  Please have your guitar professionally Setup for a beginner Guitarist and ask for Low Action.  A professional should know exactly what to do and will give great advice on the setup process. 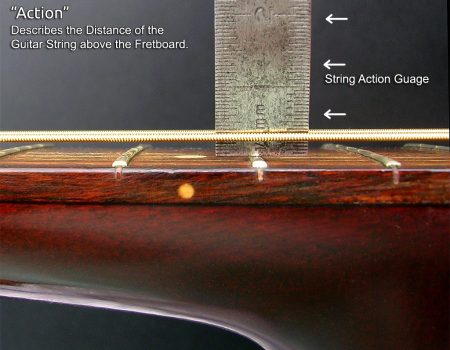